In this section, you will find easy-to-understand explanations of each grammar table to help you get the most out of your Irish Study Card.

If you come across an English Grammar Term you are not familiar with, check the Glossary section on the website. Remember that you can use your Irish Study Card with any textbook you may be using.

Remember that you can use your Irish Study Card with any textbook you may be using. 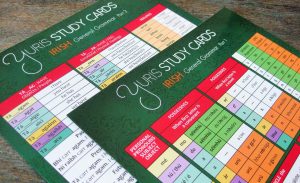 The PERSONAL PRONOUNS determine the three main colours used in the card.

Always think of the Subject Personal Pronouns as the persons who do the action. In English, they are the words I, you, he, she, it, we, you, and they.

They are divided into first, second and third persons, in singular and plural.

Think of the first person as the most important for you. They are the pronouns that include you on your own, or with someone else, I, and we.

The second most important person is the one you are talking to, you.

The third most important person is whoever is not in the room, she, he, it, they.

In Irish, you need to use specific endings and words for the different persons in different tenses. The colour-coded system will help you find the word needed for a specific person.

The colours green and orange are used to identify when séimhiú or urú takes place.

Get familiar with these colours and in no time, you’ll be able to easily identify the word you need and will be able to identify when you have to change the spelling of a word.

This section is intended to be a general explanation on grammar created for you to understand the layout of your card to take full advantage of it. By no means should this section be considered a course on its own. While it is possible to group certain rules, Irish has many exceptions, which are not contained in this section.

The colours on this table will help you identify the persons easily.

She won a medal.

In English, the person that performs the action is clearly marked by the pronouns I and you and they are placed at the beginning of the sentence.

In Irish, the word order is different. The verb generally comes at the beginning of a sentence and depending on the tense, the pronoun can be included in the verb with a specific ending, or it’s placed at the end, like tú.

Tá an úll ar an tábla. The apple is on the table.

Tá sé ar an tábla. It‘s on the table.

Tá an scian ar an tábla. The knife is on the table.

Tá sí ar an tábla. It‘s on the table.

Bhris Séan é/í. Sean broke it. (It depends if what Sean broke is a masculine or feminine thing.)

A characteristic of the Irish language is the way words are pulled together to make speaking more natural. Pauses are mostly avoided. When certain consonants come together, and they cause the air to stop, the flow is affected.

In the Irish cards part 1 and part 2, the séimhiú and urú are indicated in the colours green and orange respectively. These colours are used throughout the card to indicate when the aspiration or eclipsis takes place.

an tsagairt – of the priest

Example: an fhuinneog – the window

Bun na fuinneoige.  At the bottom of the window.

Since there’s no article, it could mean window or a window. It’s any window, not the window.

Note that there are a few exceptions to this rule.

Sean (subject) is a footballer (predicate).

Is Sasanaigh iad. They are English.

Ní duine deas é. He is not a nice man.

An Iodálach é? Is he Italian?

Arbh é Pól do chara? Was Paul your friend?

Is le Pól an carr. The car belongs to Paul.

Tá Séan ar scoil – John is at school. (John is in school now).

Tá an bord mór – The table is big.

For easy reference, the colours clearly indicate the different persons.

The centre pages have plenty of information on verbs. To take full advantage of the Irish Study Cards, it’s important to understand the layout and colour-coded system.

The left-hand side page has an upper and lower U table. The upper section contains the type 1 verbs (short verbs). They are also known as the 1st Conjugation verbs.

The bottom U table contains type 2 verbs (long verbs). They are also known as the 2nd Conjugation verbs.

On each box you will find the verb in Irish, tosaigh its meaning in English, begin, its verbal noun, tosú (beginning) and verbal adjective, tosaithe (begun).

In the centre of the page, you’ll find the three main tenses, Past, Present and Future.

Each person is indicated by its particular colour for easy reference.

Each tense table gives you the specific ending or change needed for each person for type 1 and type 2 verbs, the negative and interrogative forms.

You also need to be familiar with type 1 and type 2 verbs.

To form the past in Irish you have to do the following steps:

Within the Past Tense section, you will see a red box with the symbols – / ? and

The colour green in the table indicates that séimhiú takes place in negative and interrogative.

Ar bhris sé an fhuinneog? Did he break the window?

You also need to be familiar with type 1 and type 2 verbs. Also known as 1st and 2nd conjugation.

To form the Present in Irish you have to do the following steps:

Within the Present Tense section, you will see a red box with the symbols – / ?  These colours in the table indicate when séimhiú and urú take place in negative and interrogative.

An gceannaíonn tú? Do you buy?

You also need to be familiar with type 1 and type 2 verbs.

To form the Future in Irish you have to do the following steps:

cuirfidh mé – I will put

cuirfidh tú  – you will put

cuirfidh  sibh – you (pl) will put

cuirfidh  siad – they will put

tosóidh mé – I will start

tosóidh tú – you will start

tosóidh sibh – you will start (plural)

tosóidh siad – they will start

Within the Future Tense section, you will see a red box with the symbols – / ?. These colours in the table indicate when séimhiú and urú take place in negative and interrogative.

Ní chuirfidh mé (I will not put)

An gcuirfidh tú? (Will you put?)

OTHER FORMS IN TYPE 1 VERBS

There are some verbs with these endings and aren’t shortened, therefore, it is advisable you study these forms thoroughly.

As you can see, each box contains different sections. The Past tense is shown first.

The second word is the verb form for muid (we): rugamar, we caught.

The Present tense is given after. The first word is the form for mé: beirim, I catch.

The last word in the section is the verb form for muid (we): beirimid, we catch.

The Future tense follows the same pattern as with the Past tense. One form for mé… (I and the rest of the persons) and another for muid (we).

At the end of each verb box, the two words in bold represent the verbal noun: breith (catching) and the verbal adjective: beirthe (caught).

You’ll notice that some verbs have an asterisk, * this means they have an irregular form for the negative and interrogative in the past tense. Refer to the table on the bottom called IRREGULAR IN PAST for the irregular forms.

*IRREGULAR IN PAST (DEPENDENT)

Study this table thoroughly as the verbs are very different to the positive form.

You also need to be familiar with type 1 and type 2 verbs. They are also known as 1st and 2nd conjugation verbs.

To form the Conditional in Irish you have to do the following steps:

siúl – siúlfadh sé – he would walk

d’ólfadh sibh– you (pl) would drink

bhrisfeadh sibh – you would break (plural)

Within the Conditional Tense section, you will see a red box with the symbols – / ?. These colours in the table indicate when séimhiú and urú take place in negative and interrogative.

An mbrisfeadh sé? (Would he break?)

This table shows the 11 irregular verbs and their conditional form for every person. They follow the same rules for séimhiú and urú in negative and interrogative as with the regular verbs.

an dtiocfainn? – Would I come?

Some irregular verbs take go / nach, instead of gur /nár. Examples of each are given in the table below.

If you want to emphasize the object pronoun, use the forms beside the subject pronouns: tusa/ thusa.

Chuir sí litir chugam.  She sent a letter to me.

Chuir sí litir chugamsa.  She sent a letter to me.

Remember that the colours are used to make it easier to find the form needed.