In this section, you will find easy-to-understand explanations of each grammar table to help you get the most out of your German Study Card.

Because this is a grammar card, it is impossible to explain certain tables without the use of grammatical terms, however, if you come across an English Grammar Term you are not familiar with, check the Glossary section on the website. Remember that you can use your German Study Card with any textbook you may be using. 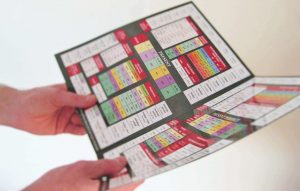 The three main colours used in the grammar charts are yellow, purple and green.

They are divided into first, second and third person, in singular and plural.

The second level of priority is the one you are talking to, you, in singular or in the plural. These persons are represented in light and dark purple.

The third most important person is whoever is not in the room, he, she, it, they. These persons are represented in light and dark green.

*Sie means you in and plural but in a formal way. It is in the green box because it’s conjugated like a third person.

In German, you need to use specific endings and words for the different persons in different tenses and cases. The colour-coded system will help you find the word needed for a specific person.

The cases are an important part of German grammar because they determine the endings of articles and adjectives. Also, specific pronouns and prepositions are used depending on the case.

The dog performs the actions in this sentence, therefore its article der (the) is in the Nominativ case.

The man is affected by the dog, therefore, its article den (the) is in the Akkusativ case.

In the previous example, for you is the answer to the question for whom? Therefore, the preposition used is in the Dativ case. This case is also used after certain prepositions and Dativ verbs.

Das Buch meines Lehrers. The book of my teacher or my teacher’s book.

The possessive adjective with a Genitive case ending shows the possession form in the sentence.

The section below is intended to be a general explanation on grammar created for you to understand the layout of your card in order to take full advantage of it. By no means should this section be considered a course on its own.

Dativ: Ich gebe dem Mann ein Buch. – I give the book to the man.

Genitiv: Ich habe das Buch des Mannes. – I have the book of the man.

The articles change depending on the cases, so make sure to learn all the different articles in the tables.

The Nominative Pronouns or Personal pronouns are used to replace a noun that has already been mentioned. They can change or decline in three ways. This table shows the Nominativ declension. It’s when the subject of a sentence is the person or thing that does the action.

In German, there are three ways of saying you. In an informal way, singular and plural ( a familiar way) and in a formal way (to express politeness).

This is an important verb which you will be using all the time. This verb is also used as an auxiliary verb so make sure you know it very well.

Wir sind Freunde. We are friends.

This is another important verb which you should learn very well as you will use it in other structures as an auxiliary verb.

Wir haben samstags keine Schule.  We have no school on Saturday.

Sie hat einen Nebenjob.  She has a part-time job.

Adjectives describe a noun or a pronoun. Look at the following sentences:

To say: I like his dog, you need to identify the possessive you need. In this case, his is sein. Then, look at the noun and identify which part it plays in the sentence. It’s in Akkusativ because the dog is the affected one, the one that receives the liking. The dog is a masculine noun, so the ending is –en

Form short sentences and practise them out loud with common nouns to get used to the possessive adjectives.

This table shows the order you need to follow when constructing a sentence.

If you want to say:  Erik is coming home by car today. The sentence has the elements: home (place) by car (manner) and today (time).

In the centre-left page, your card shows a lot of information about the Present tense.

In the centre of the page, you’ll see the endings you need to conjugate the verbs with the colour coded system.

The Present tense is used a lot in German because it is used to express many different things:

To form the Present tense is quite easy:

The bottom U table in your card shows some irregular stem changes that happen to the du and er/sie/es pronouns.

The verbs in the bottom U table, give you the stem with the change, so you only have to add the ending. Remember that this change only applies to the du and er/sie/es pronouns.

The vowel change can be:

The U-bottom table contains these coloured boxes to remind you that the changes only happen in the second and third person singular.

The two tables in your card show a few separable and inseparable prefixes.

The German language can create new verbs with the addition of prefixes. When you add a specific prefix to a verb, it can give you a new meaning.

Note that not all prefixes have a specific meaning and the same prefix can have different meanings: verschlafen (to oversleep) or versprechen (to promise).

rufen (to call, to shout)

anrufen (to call by phone)

In English the Akkusativ and Dativ Pronouns are me, you, him, her, it, us, you and them.

However, in German, there are two different types. One substitutes the Direct Object, and the other one the Indirect Object.

Bill bought them for her.

These pronouns use the same colour coded system for easy reference.

Du liebst mich. You love me.

ihn – him (it masculine)

My father is the subject

the book is the object

me is the indirect object (I’m given a book, the book affects me, not my father)

The teacher is the subject. (who?)

The question is the object. (what?)

you is the indirect object. (to whom?)

ihm – him (it masculine)

Wir sehen uns. The literal translation would be we’ll see each other, but the idiomatic meaning is see you later.

Er setzt sich auf den Stuhl. He sits (himself) on the chair.

Ich ziehe mir einen Mantel an.  I’m putting on a coat. (on myself)

This means there is/ there are.

Es gibt ein Problem.  There is a problem.

The table in your card displays the Relative Pronouns for each case in masculine, feminine, neuter and plural.

Remember that a relative pronoun is used to connect a clause or phrase to a noun or pronoun: that, who, whose, which, etc.

Das Buch, das ich lesen will, ist Der Kleine Prinz. The book that I want to read is the Little Prince.

Das ist das Haus, in dem ich gewohnt habe. That’s the house (that) I lived in.

CONJUNCTIONS (VERB AT THE END)

This table in your card displays a few Conjunctions. They are words like: when, before, as, that, after, because, etc.

For example, if you say: Because I’m tired. It doesn’t make any sense; this sentence means that you have said something else before, like: I’m not going to the gym tonight because I’m tired.

This is the purpose of the conjunction. It joins two sentences together for them to make sense.

Wenn ich reich wäre, würde ich mir ein grosses Haus in den Bergen kaufen. If I was rich, I would buy (myself) a big house in the mountains.

Get familiar with the layout of the Present Perfect in your card. It will be easier for you to identify the different types of verbs.

Ich habe gearbeitet. – I worked. / I have worked.

Du hast studiert. – You studied. / you have studied.

This table displays the endings needed to form the Imperfect for weak verbs (regular verbs), and the conjugation in imperfect for the verbs sein (to be) and haben (to have).

Ich war müde.  I was tired.

Ich hatte Kopfschmerzen. I had a headache.

This table displays 8 common irregular participles which you should learn by heart.

Ich habe gedacht. – I thought./ I have thought.

This table shows  the conjugation of the verb werden, needed to form the Future tense. It’s shown in the specific colours for each person.

Look at the section called ADJEKTIVE above.

This table shows the two forms to negate sentences in German.

Ich will keinen Apfel essen. I don’t want to eat an apple.

Prepositions connect a noun or pronoun with another word.

This table shows common prepositions. The colour-coded system shows the case that is needed in the following article or noun.

To express movement, direction, use Akkusativ.

To say where something is (position) use Dativ.

Das Buch liegt auf dem Tisch.  The book is on the table. (position)

Während der Woche. During the week.