In this section, you will find easy-to-understand explanations of each grammar table to help you get the most out of your English Study Card.

If you come across an English grammar word you are not familiar with, such as pronouns, adjectives, conjunctions, etc., you can check the Glossary section here. 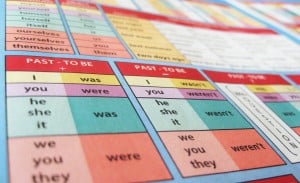 The English Study from Intermediate to Advanced contains  28 independent tables.

If you have used the basic to intermediate card, you may already be familiar with the colour-coded system, so you can skip this explanation if you want to.

The Personal Pronouns and the verb to be determine the colours used in the card.

Always think of the Subject Personal Pronouns as the persons who do the action. They are the words I, you, he, she, it, we, you, and they.

They are divided into first, second and third persons, in singular and plural.

Think of the first person as the most important for you. They are the pronouns that include you on your own, or with someone else, I and we.

The second most important person is the one you are talking to, you.

The third most important person is whoever is not in the room, she, he, it, and they.

3rd persons: he, she and it 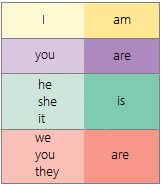 VERB TO BE - DIFFERENT TENSES

The verb to be is used incorrectly quite often. Some things to remember:

Try to avoid this:

You may be trying to say either “I go”, or “I am going”. Look at your table carefully, and you’ll find the logic behind the use of the verb to be.

Create your own sentences and repeat them out loud, so they become natural to you, the next time you find yourself saying “I am go”, you will immediately notice it’s wrong.

You can find an explanation of each tense in the basic to intermediate card.

English keeps a very standard structure, unlike other languages. The tables in your card show you the word order that the sentences follow.

Note that the only difference between the affirmative and negative structure with the interrogative is the position of the auxiliary and the subject.

Has she lived there for long?

Contractions are common in oral and informal written forms.

This table shows you the contractions for the different pronouns for tobe, have, has, will, would and had.

Always look at the word that goes after the contracted word to know which word is being contracted.

He’s been kind.  – He has been kind. (Has/have are followed by the past participle: gone, written, done, etc.)

He’d been kind. – He had been kind. (Had is followed by the past participle: gone, written, done, etc.)

He’d be kind.  – He would be kind. (Would is followed by the infinitive without to.)

In English, when you describe something, the description usually follows a certain order.

The table on your card shows the order of the characteristics, size, age, shape, etc.

This is another way of saying: “me too”. It agrees with the speaker. However, you need to use the same auxiliary that the speaker has used.

Neither works the same as so, but with negative statements. Note that the auxiliary remains the same.

A: I haven’t seen that movie. (Present Perfect)
B: Neither have I. (Neither has she, neither have they.)

This word is also used to agree with the speaker in affirmative statements. The only difference with so, is that too goes at the end of the sentence.

Question tags are used in spoken informal English. They are not questions, but more of a way to make conversation or keep a conversation open.

You are French, aren’t you?

Sinead has a daughter, doesn’t she?

Paul has been to Germany before, hasn’t he?

You aren’t angry, are you?

This town isn’t very big, is it?

Patty has worked in the same place for 15 years.

Alex and Tanya have studied German since 2014.

They haven’t told me if I got the job or not.

She hasn’t bought the tickets yet.

Have you ever had carnitas?

Where have you been lately?

By the time I got home, they had already eaten all the food.

Luckily I had saved my documents before the computer crashed.

I didn’t know he hadn’t slept in days.

John hadn’t told anybody he was coming, he surprised us all.

Had you been to any of his concerts before today?

Had Amy and Tom left before John arrived?

This time next week we will have already finished the exams.

You have to leave now; otherwise, by the time you get there, she will have left.

We have been seeing each other since April last year.

Tony has been working in the warehouse for 4 years now.

You haven’t been practising as you used to.

Have you been working out? You look great.

I had to go to the dentist because I had been having pain in my front tooth.

It had been raining every day so we couldn’t do much.

She hadn’t been practising enough, that’s why she had a hard time qualifying.

Had she been keeping in touch with you before she moved away?

By the time we land, we will have been talking for 5 hours.

Alex will have been reading for 4 hours by the time the bookshop closes.

How long will you have been studying when you graduate?

The man who lived here was German.

The car that is parked across the street is Kevin’s.

Jim, who is married to Nina, is an artist.

This house, which is 400 hundred years old, used to be a school.

Direct: I don’t know what to do about this issue.

Reported: He said (that) he didn’t know what to do about that issue.

Indirect: Do you know if Claude is French?

Direct: Does John have a ticket for the concert?

Indirect: Do you know if John has a ticket for the concert?

Direct: What time is it?

Indirect: Do you know what time it is?

Direct: Where does Greg live?

Indirect: Do you know where Greg lives?

Direct: What time did the plane land?

Indirect: Could you tell me what time the plane landed?

Your card shows  4 types of Conditionals with examples.

If you heat butter, it melts.

Butter melts if you heat it.

If you drink plenty of fluids, you will get better soon.

You will get better soon if you drink plenty of fluids.

If I won the lottery, I would travel around the world.

I would travel the world if I won the lottery.

If I had charged my phone, I wouldn’t have missed his call.

I wouldn’t have missed his call if I had charged my phone.

I wish I had more time.

I don’t have time.

I wish I hadn’t eaten too much.

I ate too much.

I wish he would hurry up. I’m so late.

He’s taking his time, and he’s delaying me.

I wish I could fly.

The old painting was sold for a quarter of its worth.

The public has been advised to buy the tickets in advance due to high demand.

It’s an honor to be invited to such an important event.

The deadline for the final project should have been respected.

I will have the carpet washed this weekend.

Ryan needs to get the car serviced soon.

We had our photo taken by the photographer Sergio Melendez.

This table gives you a few examples of participle adjectives.

Correct: I was really bored during the movie.

Incorrect: I was really boring during the movie.

Correct: The movie was really boring.

Incorrect:  The movie was really bored.

Go back home; it’s getting dark.

Get home – to arrive.

Get a letter – to receive

To get it – to understand

Get off – to descend

Get in – to enter

Get around – to circulate